How it all began

In the last ten years of the 20th century, a team of gifted researchers formed the basis of the future CJSC MiMGO, at that time working at VNIGNI Department No. 6.

Since the early 1990s, the team has received invaluable assistance from V.A. Dvurechensky, a prominent Soviet and Russian geologist, former Deputy Chairman of the Russian Federation Committee on Geology and Use of Mineral Resources and later Deputy Minister of Fuel and Energy. In particular, he guided the key lines of our team's development, helped us to establish close business contacts with leading petroleum companies and encouraged us to address the urgent challenges of the Russian oil industry.

Since the mid-1990s, a new stage in the history of the Department № 6 has begun when the students, masters and young experts from Lomonosov Moscow State University and Gubkin Russian State University of Oil and Gas joined the team. Academics B.A. Sokolov, V.V. Semenovich, O.K. Bazhenova, Y.K. Burlin and other professors of the Department of Сaustobioliths Geology and Geochemistry have rendered an invaluable contribution to the professional formation of the CJSC MiMGO staff. From 1997 to 2008 Vladimir Semenovich Slavkin, the first CJSC MiMGO CEO and later (until 2011) its scientific supervisor, was professor at the Department of Сaustobioliths Geology and Geochemistry.

By early 2000 the leading experts of the Department № 6 have come to a conclusion about the necessity of creating their own, non-governmental organization and on March 1, 2000 the Closed Joint Stock Company "Modeling and monitoring of geological objects named after V.A. Dvurechensky" (CJSC MiMGO) was founded. This made it possible to address various issues ranging from methodological and technical to financial, HR and social ones in a more effective and efficient way. 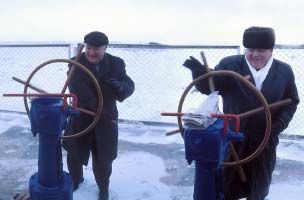 The corporate history is directly associated with the discovery of several oil fields. Another example of excellent research activities and a successful cooperation between our company and OJSC RITEK, particularly Professor V.I. Grayfer, Chairman of the RITEK Board of Directors, was the discovery of Sredne-Khulymskoye field.

A long and meticulous work on exploration, data processing, models and profiles construction was successfully accomplished. And finally, the long-awaited moment came when the turning of the shut-off valve would allow oil to flow up from the depths to benefit the society.

On October 18, 2003 the pipe valve was opened by: V.I. Grayfer, Chairman of the LUKOIL Board of Directors, RITEK General Director, member of the Russian Academy of Mining Sciences, member of the International Fuel and Energy Association, professor of the Gubkin Russian State University of Oil and Gas, winner of the Lenin and State Prizes, and V.V. Slavkin, first CJSC MiMGO CEO, honored scientist of the Russian Federation, Dr. Sci. in Geology and Mineralogy, professor of the Lomonosov Moscow State University.

About the illustrious person our company is named after 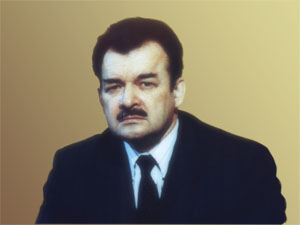 Born on June 30, 1934 in Rostov-on-Don, he graduated from the Rostov State University in 1958 as a geological engineer.

In 1961 Vadim Anatolievich was promoted to senior geologist of the subdivision. Even then the young specialist had already shown himself as a man with remarkable energy, enthusiastic and gifted organiser. Vadim Anatolievich Dvurechensky devoted his youth to prospecting and exploration works in South-Western Caspian Sea region, where unique oil and gas fields were later discovered.

In 1971 V.A. Dvurechensky was promoted to Deputy Head of Mineral Resources Department of the RSFSR Ministry of Geology, where he enthusiastically contributed to the geological exploration of Western and Eastern Siberia, Caspian Lowland, Timan-Pechora, Yakutia and Sakhalin. There he personally participated in the discovery of unique major oil and gas fields and also contributed to the creation of reliable raw material sources for oil and gas production. As a member of the State Planning Committee of the USSR, he was at the forefront of drafting plans for hydrocarbon industry development and determining short and long-term levels of domestic oil and gas production.

Over the last years, Vadim Dvurechensky has concentrated on developing geological exploration and increasing the fuel and energy sector to accelerate the development of Sakhalin, Western Siberia, Timan-Pechora and Yakutia's offshore fields, which in great measure depended on attracting foreign investment. He has greatly contributed to the drafting of the Subsoil Law, the Law concerning Production Sharing Agreements and a number of other regulatory documents to formalise subsoil use and to ensure investment security.

His modesty in everyday life and easy communication with colleagues was particularly admirable, despite his highly responsible positions at the RSFSR Ministry of Geology, the USSR State Planning Committee, the Committee on Geology and Subsoil Use of the Russian Federation and the Ministry of Fuel and Energy.

We will always cherish the memory of this remarkable man in our hearts. And it is a privilege and honour that our company bears the glorious name of Vadim Anatolievich Dvurechensky.

Evolution and new chapters of history

On June 1, 2011 CJSC MiMGO opened a new chapter in the company's history. After 11 years of autonomous functioning, the company headed by the new CEO - Vasily Nikolaevich Koloskov, PhD in Geological and Mineralogical Sciences (the CEO of CJSC MiMGO from 2010 to 2012) - has joined the scientific system of FSBI "VNIGNI". As a result, the company has expanded its opportunities in a number of R&D and production branches. An intense cooperation with all subdivisions of FSBI "VNIGNI", as well as leading Russian laboratories, has strengthened CJSC MiMGO position in the servicing market.

On June 9, 2012, a CJSC MiMGO Extraordinary General Shareholders Meeting elected a new CEO, Sergey Sergeevich Gavrilov, PhD in Geological and Mineralogical sciences, who is currently in charge of the company.

The range of works carried out and the number of the company's employees are steadily growing adapting to the needs and priorities of modern petroleum companies.